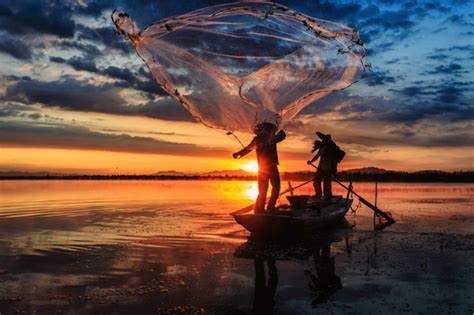 “As Jesus walked beside the Sea of Galilee, he saw Simon and his brother Andrew casting a net into the lake, for they were fishermen” ~Mark 1:16

At the very beginning of his earthly ministry, Jesus assembled the group who would become his twelve disciples. These are the ones who would spend the next three years travelling with him, eating with him, living with him and learning from him. Three of them would become part of his inner circle, including Simon.  It seems this might not have been his first encounter with Jesus. The gospel of John records that it was Simon’s brother Andrew who had first introduced them. Over the course of the next three years, though Jesus and Simon were master and servant, they also became close friends. Jesus renamed him Peter and he was the first disciple to recognise Jesus as Messiah, the one promised by God to save his people.

No matter the exact timing or circumstances of their meeting, Simon Peter’s story began with being seen by Jesus as he toiled away at his everyday job. He saw into Peter’s heart, which was capable of great love but also deeply flawed, and called him regardless. Being seen, in all his humanity, and loved, despite his imperfections, was the beginning of a life changing kingdom adventure for Peter.

It’s no different for you and me. Jesus sees you toiling away at your everyday tasks. He sees you and calls you into deep and intimate friendship with him and then on into his kingdom work. Where does he see you today? Perhaps not a fisherman but employed in some other vocation? Or retired, or struggling to find work? Jesus issues you the same invitation.  Might he be saying to you ‘I see you, I know you, I love you. Come, follow me, and take part in what I’m already doing in the world. Come on a life changing kingdom adventure….’

Thank you Lord that you see me where I am today, and you love me. Your seeing of me frees me into life. Help me take up your invitation of friendship and join, with joy, your kingdom work in the world.